Queenstown - Sparrows by the dozen

I have had several banding attempts over the last few days with some success, mostly with Sparrows. On Monday I had nets up for the morning and caught 62 birds which is the highest total for a day. As expected at this net site the majority were Juv House Sparrows. On Tuesday it was a bit windy for nets but I did catch some birds in the neighbours hen house, again mostly Sparrows but also a couple of Blackbird recaps. Both were interesting. One had held the record for the oldest bird caught here, it still holds it but now by a few more days. The other was one of the pulus I banded a couple of months ago. Great to know it has survived at least for this period. Yesterday I had nets up for an hour or so until the wind got too strong, but still manged 16 birds. 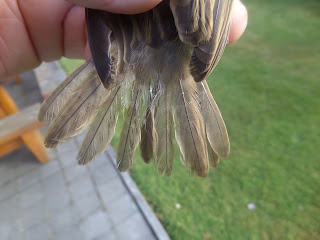