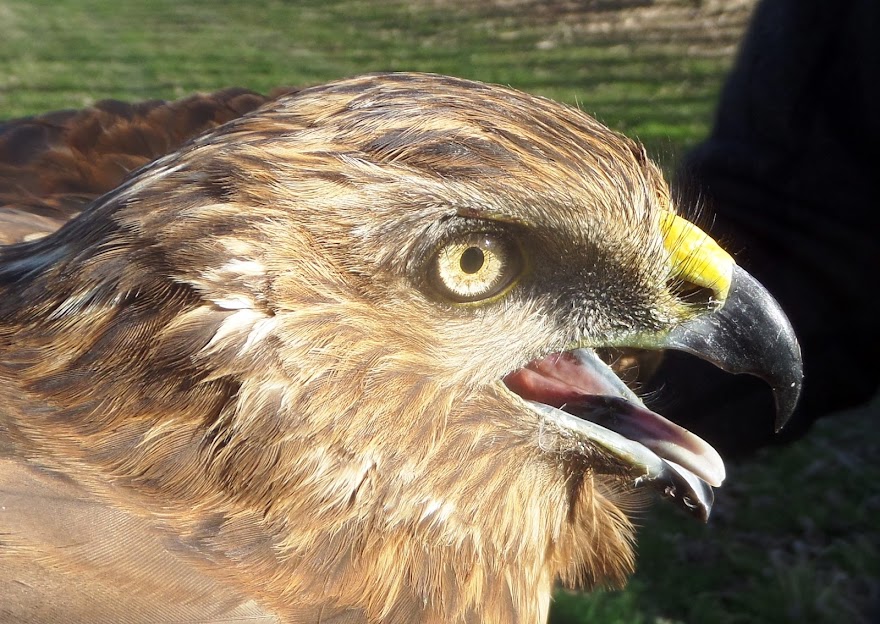 Our planned session at the Quarry on Wednesday was abandoned due to rain. It had already been raining almost every day for the previous week and continued until around midday Friday. As I wanted to collect the feeders for use in next weeks proposed session at the Cashmere Rd site I went down Friday afternoon to pick them up. Just to make some use of the trip I erected a net and was surprised by a steady flow of birds especially as the feeders hadn't been topped up since Tuesday and one had mysteriously disappeared.
In less than 2 hours I caught 21 birds of 5 species with 17 new and 4 recaps.
Species caught were- (recaps in brackets)
Blackbird - 1
Fantail - 1
Silvereye - 10 (2) Both the recaps were banded this year.
House Sparrow - 4 (1) The recap was banded Aug 2019 and at 1079 days from banding is a reasonably old bird for a Sparrow.
Bellbird - 1 (1) Both birds were male and were caught together. The new bird was a youngster and was possibly being hassled by the older banded one. The recap was banded June 2019 and is now at 1128 days from banding our oldest Bellbird recaptured.
All the recaps had been banded at the Quarry, in the Conservation Area, which as a bird flies is only a short distance.

On Wednesday the Harrier traps were set in a large blackcurrant paddock in Lakeside near Leeston. It had been intended to set them on another farm but as they were shearing the site was changed. It turned out to be a fortunate move as we ended up with a record catch of seven birds. This is nearly double the previous record of four in one day.

All the birds were judged to be adults except one which still had the brown eye of a younger bird.  They were, except for two, females. Although the distance between this site and the one previously banded at is only just over 3km there were no recaps.

Although we have had 2 birds caught at the same time in a trap before Wednesday was the first time we have had 3.

Email ThisBlogThis!Share to TwitterShare to FacebookShare to Pinterest
Labels: Harrier

We had a very successful session at the Cashmere Rd site yesterday morning (Thursday 30 June). Except for the fact that I made the decision to knock off a little earlier than usual we would have caught over 100 birds. As it was when I added up when I got home we had caught 95 with 94 new and only 1 recapture. A bit surprising to only get the 1 recap as we banded over 120 at this site last year, which was our first year there.

There was very little variety in the catch with, as expected, by far the majority being Silvereyes with 84 new and the sole recap. The other birds were 7 Greenfinch and 4 House Sparrows. Next session I might look at putting a net up away from the hordes of Silvereye to try and catch a bit more variety.

Three of the Silvereye had foot problems, 1 had a Pox lesion and 2 had what I call Scaly foot. I am not sure what causes this but it probably a mite infestation.

Yesterday Ruth and I drove down to Timaru to band some Raptors that are in Rehab awaiting release back into the wild. The main purpose of the trip besides banding the birds was to help with the banding training of two of the women who assist with the birds' care. The two women, Jenni & Angie are very comfortable handling these birds and are picking up Banding very quickly and competently.
We banded eight birds in total, 5 Little Owls and 3 Harriers. The number of Little Owls I find amazing, we had a total of 9 birds in a large flight enclosure. 3 had already been banded and are waiting release. The other 6 were meant to be all banded but one bird avoided us. They are experts in zooming from one of the many hidey-holes to another and it was almost imposable to track individual birds, so to avoid undue stress we left the one without bling. 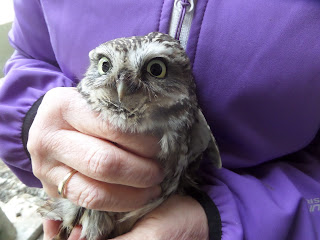 The three Harriers had come from as far afield as Twizel, Fairlie and Waimate. We were very fortunate to have 2 Vets with us both of whom are very interested in the care of wild birds. Both are very competent in handling them, and although they don't band it was great to discuss aspects and ideas about the practice.

After the banding was done we were invited to participate in a BBQ including Fallow Deer sausages and a cold beer before starting our journey home.

I have twice set the traps in attempts to catch Harriers in the last few weeks. The first was a bit of a disaster. I went out with high hopes to find that at least 3 birds had been let out by someone  unknown. Unfortunately by the way the traps had been moved about the birds would have been very stressed before being released.
The second attempt was a little more successful and although only one bird was caught it was our first recapture. It was great to be able to check the condition of the colour band which was, except for being a bit dirty, in good condition. This is the first time this particular type of band has been used in NZ as far as I know.
Posted by Peter R at 11:26 No comments:

We had a session at Jan's place on Kennedys Bush Rd Thursday morning. With only a small team and a constant flow of birds we were kept pretty busy. We processed a total of 51 birds with 47 being new and only 4 recaps. There were only 3 species caught with 1 new Blackbird, 3 new House Sparrows with 1 recap, and 43 new Silvereyes with 3 recaptures. With only 2 nets up 1x12m, and 1x 6m  we were constantly extracting Silvereyes preventing the more weary species from being caught.

The recap House Sparrow was banded last year at Ruud's place which is only a hundred m or so away. All the Silvereyes were banded at this site, two last year and the other in June 2019. So at 1085 days from banding it is a reasonably old bird.

I received a photo from Andrew who has, since obtaining his Level 2 permit, has been doing some banding at his property in Rolleston. The photo was of a deformed leg of a House Sparrow which has what could be called a Club Foot with no claws. Whether this was caused by birth defect or an accident is anybody's guess but would be interesting to know. 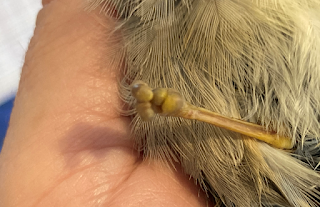 Friday 3 June - Back to the Quarry

Due to Wednesday's session being cut short because of rain, and Annemieke being keen to get a bit more training in before heading back to Wellington, Annemeike and I decided to try again at the same site. Going back to the same site is not always a good idea but as there was just going to be the two of us I thought we might get enough birds to be worth while. This proved to be the case as we processed 33 birds of 5 species with 22 new and 11 recaps. Once again by far the majority were Silvereye with 20 new and 9 recaps. Other species were Blackbird 1, Dunnock 1 and recaps 1 each of Greenfinch and House Sparrow.

Amongst the recaptures were some interesting birds. The Greenfinch was the same bird caught 2 days ago, and most of the Silvereyes were also banded 2 days ago, but one was  banded back in July 2018 and is now at 1408 days from banding. This is our oldest Silvereye recap. Not to be outdone the only House Sparrow caught was banded June 2018 so at 1457 days is the oldest bird of any species recaptured at the Quarry.

Interestingly, although both these old birds were banded within a couple of hundred meters of today's site neither have been recaptured before.

Halswell Quarry, 1 June - lots of Silvereyes and then it rained.

We had a session at the Quarry this morning. Initially there was fairly good conditions, maybe a little too much wind but the net sites were sheltered. For the first 1 1/2 hours we were inundated with silvereyes with all hands to the nets and then the banding table. Unfortunately just as things were steadying down it started to rain. This was totally not in the forecast so, hoping the rain would stop, the nets were furled and we waited for it to blow over. After a half an hour we decided to take the nets down. Just as we finished this task of course the rain stopped and the sun started to appear. But with sodden nets we decided to call it a day and head home for a coffee.

The site we used was a new one in the Conservation Area of the Park about 200m from one that is regularly used. The total number of birds processed was 46 with 41 new and 5 recaps. All but 3 of the birds were Silvereyes with the others being a recap Greenfinch and a new House Sparrow and Dunnock. I suspect that the reason that there was so little variety was that people were constantly at the nets extracting Silvereyes with more wary species staying well away. If the rain hadn't arrived I am sure there would have been more variety caught as the Silvereye rush was starting to abate.

All the recaps were banded at a nearby site, 3 in the session a fortnight ago. One of the others was banded last year and the last one recaptured was a Silvereye banded in 2019.