We had a very quiet morning at the Quarry catching only 8 birds but with 6 species at least we had a bit of variety. There were 2 Greenfinch, and 1 each of Dunnock, House Sparrow, Fantail, Grey Warbler and 1 new Silvereye and a recap which was banded 308 days ago and is the oldest Silvereye recapture we have made.

Queenstown - the last few days of the trip

We are now back in Christchurch after our quick trip down South. Except for House Sparrows didn't catch a lot of bird. In order to avoid Sparrows I put nets up where I thought there weren't any one day. Didn't catch any Sparrows and not much else either. Also had a go at catching Californian Quail again but without success.

We have been down here at Littles Road Dalefield for several days and I have attempted to do banding with very mixed sucess. Rebbeca (Bex) came up from Te Anau at the weekend and we had a session at the stream Sat afternoon which was pretty slow only catching 9 birds. She came here on Sun morning with even less sucess we didn't catch a bird untill after she left when I caught a few. On Monday I had another session at the stream but it was curtailed when it started to rain. This morning (Tuesday) Hayley came to try her skills and with the same setup as we had on Sunday. We caught heaps although of  very little variety with almost all being juvenile House Sparrows.
This evening I set a net up near the house with the hope of catching something differant. Initially it was again Sparrows althugh there was a very old one which was good. Then my Grandson Tom flushed a covey of Californian Quail into the net with me having failed miserably earlier. Of the 12 or so in the covey we caught and banded 8 including an adult Male and Female the rest being juveniles.

The combined totals for the period is (recaps in brackets)
Goldfinch - 6 (0) all caught at the stream.
Greenfinch - 2 (0)
Redpoll - 1 (0) the first for a while.
Silvereye - 1 (0)
House Sparrow - 39 (6) mostly juveniles but included a bird banded a couple of weeks after we started banding here. It is now at 1238 days from banding our oldest recap of any species recaptured here.
Dunnock - 2 (2)
Californian Quail - 8 (0) by far the biggest catch far exceding the 3 caught in the past.

First off please forgive me for not posting for a while.  The Wellington group is active but the blog poster (me) keeps forgetting to put the results up on this wonderful forum.

This is the first time that we've visited the Houghton Valley Stream site in about a year.  This site is very seasonal as it requires a good period of dry weather to be productive.  Luckily Wellington has had quite a bit of the old dry over the last couple of weeks so the stream is getting lots of use as it's the only open water course in the valley. 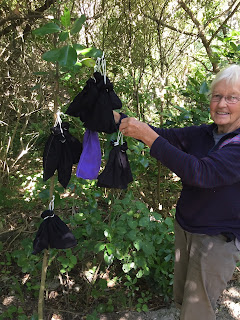 Ros, Kate (now a level 2), Barbara and myself pulled out 62 birds representing 9 species in the space of 2 and half hours.  It was ring and fling in Peter's grand tradition for a while there.

Unfortunately for us we had run out of AX bands so we had to release the Fantail and Warbler without any bling. 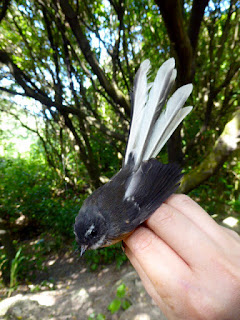