Queenstown - the last 10 days or so

I have had a few sessions here over the last 10 days or so. There was much variation in both length and success. Also had a session at the neighbours which was, with only 4 birds caught, a bit pathetic. Will have another go there in the next week or so but will use a different net configuration.

The most interesting event was not banding a bird, but a near miss. Yesterday I put a couple of nets up in net lanes I had cut on the bank of a stream that borders one side of the property. These were amongst a mixture of introduced trees mostly Hawthorn, Silver Birch and Willow. While extracting a Greenfinch a small flock of Brown Creeper moved along feeding on the other side of the net. Three of them eyeballed me through the net from about 2 feet away then moved on. I left the nets up but they didn't oblige, --- perhaps one day.

There has been an apparent increase in bird numbers recently especially of Blackbirds which are feeding on Hawthorn berries, and of course, mostly feeding at the top out of reach of my poles/nets.

Since the last update I have put nets up at various places around the grounds and twice at the stream at the bottom of the property.  At the first session at the stream I caught 20 birds which was I think a reasonable catch but the second time I caught 3 which was pathetic. So probably won't go back there for a while. 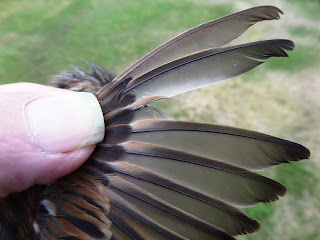 Dunnock - 3 (2)
Tui - 2 (0)
Bellbird - 5 (2) all Tui & Bellbird were caught in nets set next to a Nashi Pear tree.  The tree is a bit too high for my set up but I catch a few of the low flying ones. They love the juice of partly eaten fruit. One of the new Bellbirds was a female, the first and only one I have caught down here. A ratio of 1 Female  to 12 Males is a bit out of sync. 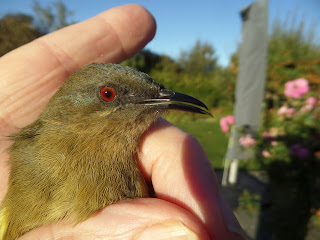 Email ThisBlogThis!Share to TwitterShare to FacebookShare to Pinterest
Labels: Bellbird

It's raining here today so I have crunched the numbers for the birds caught in Wellington for the banding year to 31 March. The totals were down by about 50% on previous years, mainly due to very little banding going on for the last few months of the year.

We caught 1543 new birds of 20 species and made 913 recaptures of 11 species. The species total is a record due to several new species being caught during a field trip to Mana & Matu/Somes Islands. During this trip Yellow crowned Parakeet, Red crowned Parakeet, N I Robin and Whitehead were added to the groups species list.

I have just tallied up the birds banded down here for the banding year to 31 March. A total of 995 birds of 16 species were banded and 277 recaptures of 12 species were made. This is not for a full year as banding only started here on 12 Sept 2015.

Species caught during this period ranked by new birds banded were -

Not a lot of birds about at the moment and with several wet days there has not been much banding recently. Hope to do a bit in the next day or so.
Posted by Peter R at 16:59 No comments: