Peter has asked me to post a few entries on the blog about hihi on Kapiti Island throughout the current breeding season. So here is the first one!

The hihi, or stitchbird (Notiomystis cincta), is an endemic passerine historically found in the North Island and on other surrounding offshore islands. The species declined rapidly since the late 1800s mainly due to habitat loss and the spread of introduced predators, and now Hauturu/Little Barrier Island is home to the only naturally occurring population of hihi. Hihi have since been transferred to several locations around the North Island and populations are now managed at Tiritiri Matangi Island, Maungatautari Ecological Island, Bushy Park, Kapiti Island and Zealandia.

Hihi were first translocated to Kapiti Island in 1983 and their fortunes have fluctuated since then. Subsequent transfers, the removal of possums, kiore and Norway rats, and the implementation of a supplementary feeding system have allowed hihi on Kapiti to slowly increase in numbers. The current hihi population on Kapiti is 108 known birds. 94 of these were identified in the most recent pre-breeding census in October 2015, and 14 unbanded birds have been caught and banded since September 2015 to bring the total known population to 108 individuals. There are still an estimated 5-10 unbanded birds yet to be caught.

Birds are caught by modifying the feeding cages and patiently waiting for unbanded birds to take the leap of faith into the cage. A trap door is then pulled by a waiting person and the bird is removed from the feeding cage. Once safely in the hand some key measurements are taken, the hihi is banded and then released.

The birds have currently all but abandoned the feeders, indicating that they are nesting and incubating eggs, or perhaps feeding fledglings. Hihi chicks are fed by their parents for around 30 days before they fledge, which is a long time compared to other passerine species (bellbirds take about 14 days to fledge after hatching). We are expecting to see juvenile hihi in mid-January, who we will attempt to catch and band as well.

For more information about hihi check out www.hihiconservation.com/ and nzbirdsonline.org.nz/species/stitchbird

Posted by Nick Fisentzidis at 15:20 No comments:

I have continued to do some banding down here near Queenstown over the last week. As expected (and hoped for) the ratio of recaps to new birds has increased with some specie recaps now out numbering new birds.The Redpolls that were very vocal and obvious last week have now largely left the area, although there is still the odd one or two being caught.

Also caught another couple of C Quail - released unbanded. The wheels have been set in motion to get a variance to our permit so we can band them but I suspect the wheels will turn rather slowly.
Posted by Peter R at 18:22 No comments:

I have been at my son's property just out of Queenstown for the last few days and have managed to get some banding done on most days. There has been a change in the local bird population since I was down in September. Silvereye have all but gone and Blackbird and Song Thrush appear to be much reduced in numbers. On the other hand Redpoll are now numerous, buzzing about all over the place with some even managing to buzz into a net. Have caught 81 birds of 11 species with 53 new and 28 recaps.
Species caught are - (recaps in brackets)
Blackbird - 11 (7)
Song Thrush - 3 (4)
Dunnock  - 4 (2)
Chaffinch - 3 (9) at one point I had 5 recaps and no new birds, was wondering if the whole population was banded.
Greenfinch - 1 (0)
Redpoll - 13 (1) the recap was possible the first Redpoll I have ever recaptured even if it was only 1 day.


Yellowhammer - 2 (0)
Starling - 4 (1)
Kingfisher - 1 (0)
I have also caught a couple of Californian Quail but unfortunately I am not permitted to band them. They are classified as Game birds and can only be banded by Fish & Game or with their permission. As the Otago F & G haven't got a current permit they were unable to give me the required authorisation. 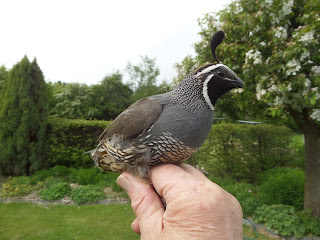 Kate, Annette, George and I had a fairly successful session at the Houghton Bay stream on Sunday afternoon. We caught 67 birds of 8 species with 57 new and 10 recaptures.