The session yesterday morning was cancelled because of rain so Annette and I tried again this morning. We managed to catch 61 birds of 5 species with 53 new and 8 recaptures. The catch was all introduced species and was dominated by House Sparrows with 48 new and 6 recaps. All the recaps were recently banded with several banded as unsexed Juvs which we have now been able to sex. There were 2 new Chaffinch with 2 recaps both of which are now into their second year i.e. now aged as 2.
﻿﻿ ﻿
Other species were 1 each of Dunnock, Blackbird and Starling. The Starling must have been a late fledgling as it was still completing both body and wing moult.
﻿﻿ ﻿﻿
The strong wind affected the numbers caught but even so not a bad catch.
Posted by Peter R at 19:06 No comments:

Went to the Houghton Bay stream this afternoon in another attempt to catch Fantails, but only managed to catch 3 which was disappointing. Caught a few other species though; 4 Silvereye, 1 Grey Warbler, 1 Tui and a Chaffinch. It was a change to have a catch dominated by native species. There is a huge drop in numbers from this time last year, in 5 sessions between the end of March and the beginning of May we averaged 87 birds per session, mostly Silvereyes, which are almost absent from stream sites this year.
Posted by Peter R at 19:53 No comments:

I have had two attempts to catch Fantails at the Zoo Stream (at the moment more of a trickle) with some success. They come in to bathe in the evening just before dark and seem easier to catch than during the day, but even then they frequently hover in front of or bounce out of the net.
Last Monday 16 April I caught 5 with the bye-catch of a Chaffinch. This evening, 23 April I also caught 5 and 3 Blackbirds and a Chaffinch recap as well.
Packing the nets up when it is getting dark is interesting with the Lions roaring.  They sound very close just as though they are on the other side of the bushes!
Posted by Peter R at 20:41 No comments:

We had a very successful day’s banding at the Zoo on Saturday. Conditions were near perfect for banding most of the day, a little too much sun for brief periods but then some cloud would role over. In all we caught 114 birds of 9 species with 92 new birds and 22 recaptures. There was a good turn out of people with a couple of keen youngsters, even so, we were very busy for the first couple of hours and perhaps could have done with another experienced bander. After the initial rush there was still a steady flow of birds and as we were taking nets down every net contained birds.
Species caught were – (Recaps in brackets)
Blackbird – 1 (0) a surprisingly low tally.
Dunnock – 1 (0)
Chaffinch – 4 (0)
Greenfinch – 6 (7) One of the recaps was banded in April 08, one in June 09 another was banded at the Zoo in April 11 recaptured at Houghton Bay in Aug 11 and is now back at the Zoo.
House Sparrow – 38 (2) one of the recaps was originally banded at Bridie’s on

As well as the banding the opportunity was taken to collect blood samples from some birds for avian malaria screening as part of a study being undertaken by DOC. 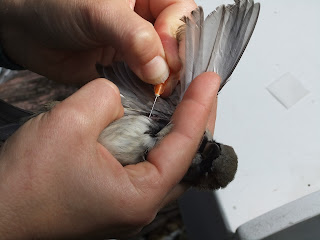 Annette, Anneke and I had another attempt to catch Silvereyes at the Fennel patch this morning with limited success. Numbers were way down on a couple of weeks ago but we did manage to catch 7 new and 4 recaptures with a bycatch of the usual Dunnock and a Goldfinch. Three of the recaps were recently banded birds with the other banded at Houghton Bay (about 2km away) back in December 11.

Looking back at the records for the last 10 years a sudden drop in Silvereye numbers at this site is usual about mid April, as well we had a Falcon do a swoop over the nets. This bird has apparently been in the area for a while and no doubt makes smaller birds keep their heads down. Also, someone probably City Council water works, people have cut a considerable area of the Fennel.

I have just finished sorting out the banding returns for the Banding Office for the year ending 31 March. Although down considerably from last year’s record numbers it was still a reasonable year.
The biggest change from last year is a big drop in both Silvereye and Greenfinch numbers partly offset by an increase in House Sparrows.
Species caught for the year in order from highest to lowest were –
No 1 Silvereye – The usual top spot holder although a big drop from 10/11 and well below the 6 year average. With the mild autumn and early winter along with an abundance of berries Silvereyes did not come to gardens and food tables until well into the winter, then after a couple of weeks they disappeared again.  This corresponded with a large build of numbers on the western side of the where they were feeding on a profusion of Karo flowers and where we caught comparatively high numbers at the Houghton Bay Stream. Also we did not have the big influx of Silvereye that we had the previous year.
No 2 House Sparrow – Reclaiming the second spot back after a couple of years in third. Although numbers dropped off markedly in the autumn there appeared to have been very good breeding in the spring/summer months with the subsequent capture of large numbers of juveniles.
No 3 Greenfinch – Dropped a spot from the last 2 years and a big decrease from last year, not sure of the reason, perhaps a poor breeding season or, did the country birds not come to town?
No 4 Chaffinch – A record year since the banding year was changed 6 years ago with a lot of birds caught at our stream sites.
No 5 Blackbird – A slightly above average number.
No 6 Starling – Below the average for the previous 6 years but close to last year’s number.
No 7 Tui – Slightly down on the average but we haven’t put the effort into catching them that we did a few years ago.
No 8 Grey Warbler – A record number and the highest ranking ever with most caught at stream sites especially at .
No 9 Goldfinch – About an average year, there were large numbers feeding on with Redpolls last winter but we were unsuccessful in catching many.
No 10 Dunnock – A noticeable reduction in numbers that appeared to be across all sites. Not sure why?
No 11 Fantail – A big reduction in numbers probably due to mortality during last winter’s snow.
No 12 Yellowhammer – another species with a big drop from the last 2 years. There were large numbers feeding on parks last winter but they were more mobile than usual and we were unable to catch many. The one semi successful session was at but it was aborted when the footballers came out to practice.
No 13 Kingfisher – very much a by-catch bird but nice when we get one.
No 14 Redpoll – Like Goldfinch large numbers over the winter on but unable to catch them.
No 15 Song Thrush – with only one bird caught very disappointing, not sure why we don’t get more, there are a good number about.
No 16 - Although only 1 caught I expect to get more in the future with their spread about the city.
There was a big reduction in the number of birds recaptured especially with Silvereye, Greenfinch, Fantail, Dunnock and Blackbird. The first 4 corresponds with a drop in overall numbers but I am not sure about Blackbird.
Recoveries of dead birds were mostly similar to last year with Silvereyes being noticeably down due to a number recovered during the previous year’s big influx of birds.
Oldest Birds of each Species caught by the Group
Numbers in Red are birds recaptured/recovered during the last year. The Days column is the number of days between banding and recapture or recovery. The Est Age column is the estimated minimum age of the bird.
During the year we had 14 birds recaptured or recovered over 5 years from banding – 16 Silvereye, 2 Tui, 2 Starling, 2 Blackbird, 1 House Sparrow and 1 Chaffinch (the first Finch of any species we have recaptured over 5 years)
Posted by Peter R at 16:57 No comments: