I have been in Auckland for the last week so haven't been doing any banding around Wellington. However I was fortunate to go out to Tiritiri Matangi Is yesterday with John, a UK trained and very experienced bander (ringer). We joined up with Simon and his team who were doing a survey of Rifleman and catching and colour banding juveniles.  Rifleman have been introduced onto the Island over the last few years and are slowly starting to colonise various parts of the bush. John is the current chairman of the Tiritiri Matangi Is Trust and Simon is a former chairman.

I accompanied John and his wife Kay for a period to survey a particular patch of bush. With the aid of an audio lure were able to locate several birds. A mist net was then set up and with a speaker on each side an attempt was made to lure birds down and into the net. During the period I was there 3 were caught, 2 of which were already colour banded but the other was an unbanded male. We had been hoping for an unbanded female which had been seen in the area so this male was a pleasant surprise.
﻿


There were still at least 2 unbanded birds in the area but unfortunately I had to leave to catch the ferry. Hopefully John and Kay were successful after I departed.

On my way back to the ferry I saw the biggest Weta I have ever seen, it was humongous.

I will be back in Welly early next week so hopefully will be able to get some banding done after that.
Posted by Peter R at 10:34 No comments:

Email ThisBlogThis!Share to TwitterShare to FacebookShare to Pinterest
Labels: Rifleman, Tiritiri Matangi Is

I had another session at the Houghton Bay stream this afternoon. I was late getting there so was about an hour late in setting up, which I think affected the catch as the majority of birds were caught in the first half hour. Kate and Mary arrived just after the initial rush was over so didn't get to process many birds.

The catch was 22 birds with 18 Silvereyes, 1 Tui, 1 Chaffinch, 1 Grey Warbler all new and a Fantail recap. So it was much quieter than yesterday morning.
Posted by Peter R at 20:02 No comments:

We had a very successful banding session at the Houghton Bay stream this morning. I was joined by Sarah J, Kyle with Finn and Kyle's parents who are over from Canada for a visit.
We caught a total of 81 birds of 8 species with 71 new and 10 recaptures.

One of the Silvereye had a very noticeable growth bar across its tail and also had a very poorly defined eye ring. 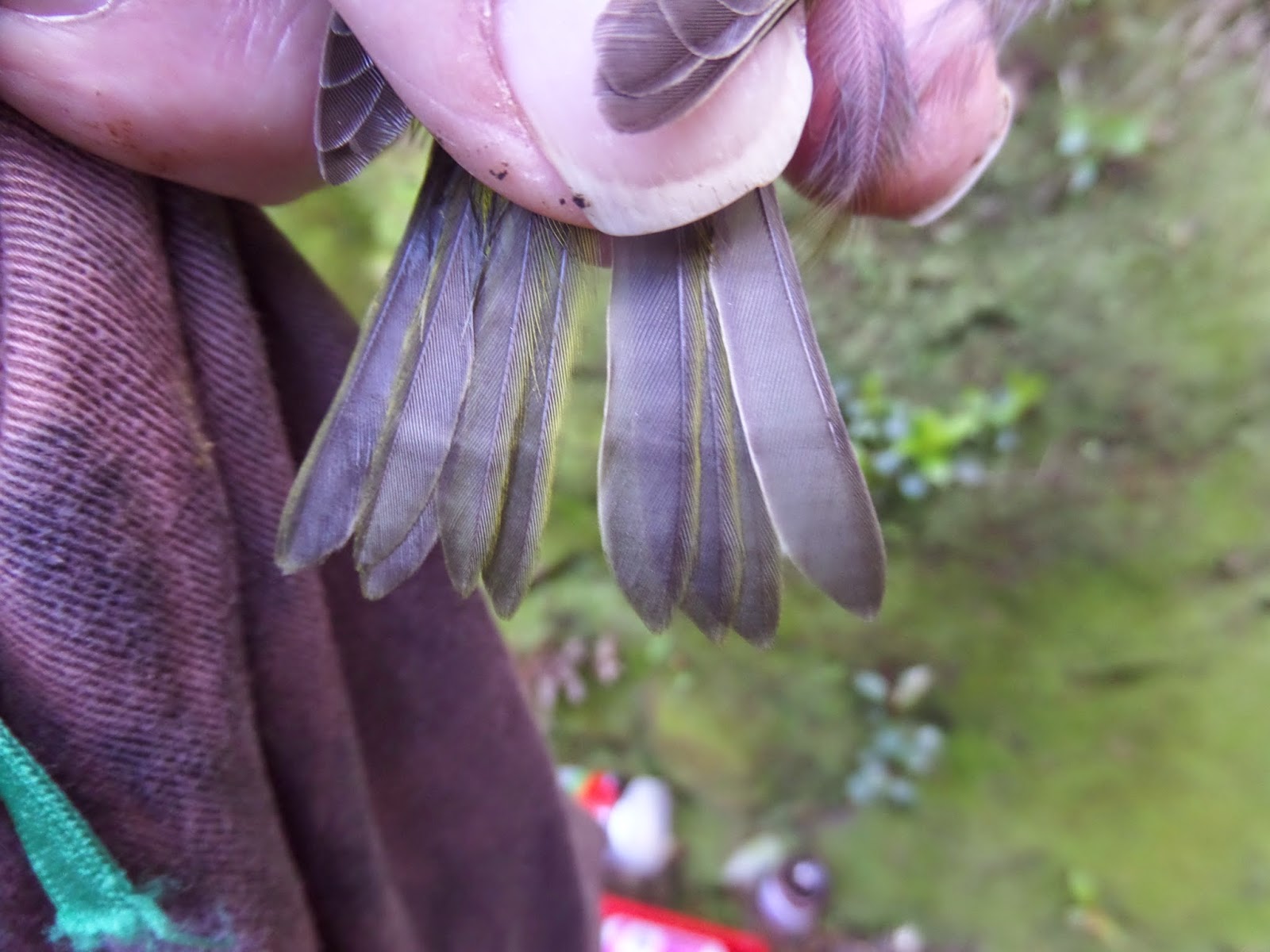 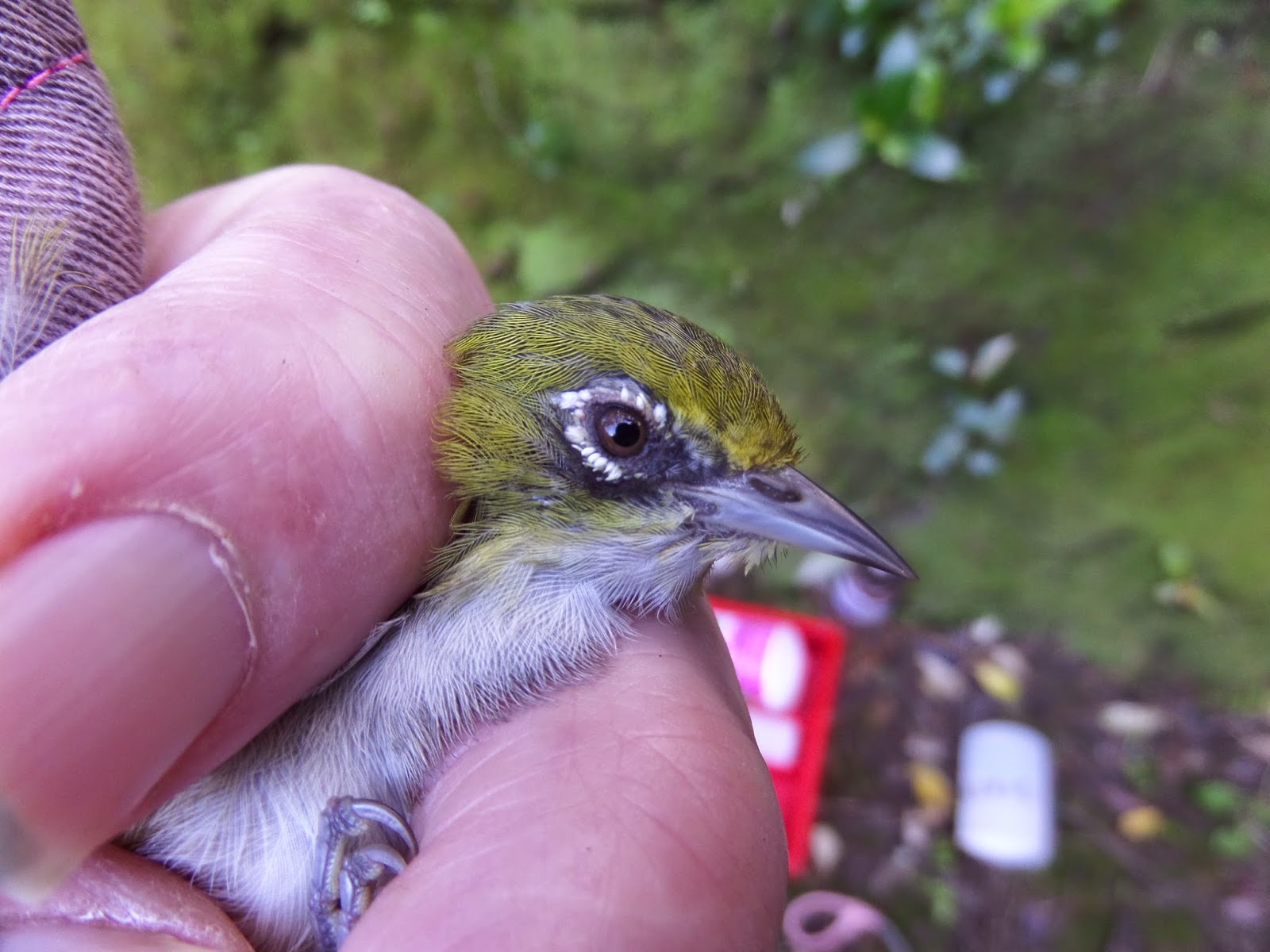 Hope to have another session tomorrow afternoon to compare birds AM v PM.
Posted by Peter R at 18:35 No comments:

Ros and I had a successful morning's banding on Wednesday morning catching, more than twice as many birds than at the session at this site last month.
We caught 65 birds of 4 species with 50 new and 15 recaptures. As is usual at this site the catch was dominated by House Sparrows with 46 new birds and 9 recaps. There was a big sex ratio difference in the Sparrows caught with 38 being male and only 17 female.
Other species were Blackbird 1 new, 4 recaps. Dunnock 2 recaps and Chaffinch 3 new birds, all male. 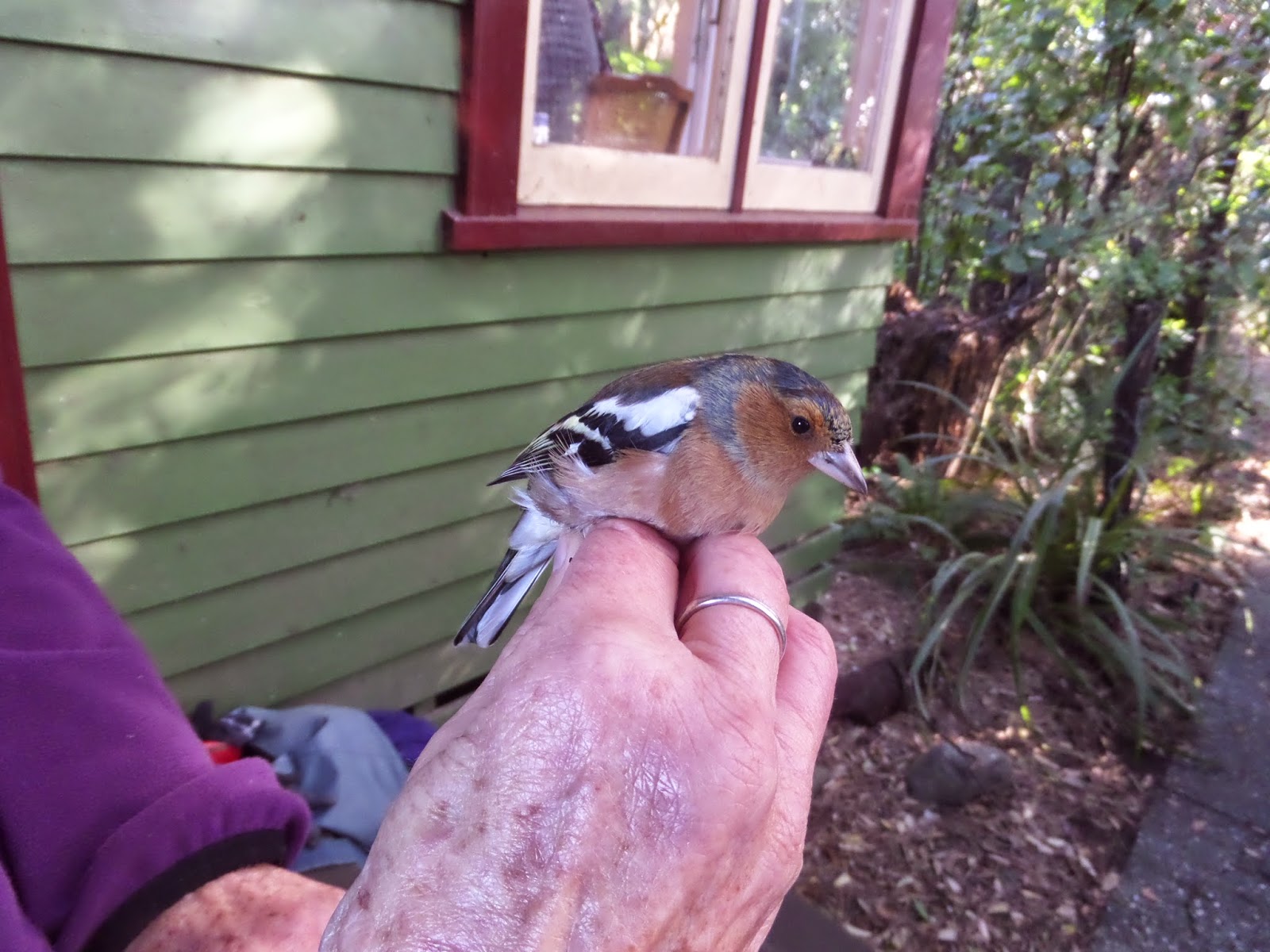 A feature was the total lack of Silvereye with none seen or heard.  There were however a few Tui about but none found the nets although 3 were hooning about very close.  Not sure whether we wanted all 3 to go in or not? One at a time is usually enough.

Today was a more successful day at the Zoo than recent sessions have been. Despite a very cold start the weather improved and was good for mist netting for most of the day although surprisingly in the afternoon there was bright sun on several nets reducing the catch. There was a good group of banders including Ros, Sarah V H, Aditi (usually referred to as De), Roisin and Helen,
We were later joined for a couple of hours by Sarah J, Kyle and little Finn.

I spent a couple of hours at the Houghton Bay stream this afternoon and caught 17 birds of 7 species - all new. Birds caught were Silvereye 7, Blackbird 3, Chaffinch 3 and 1 each of Dunnock, House Sparrow, Fantail and Tui. Most of the birds were caught in the first 45 minutes and then it went quiet, perhaps I was a bit late getting there.

I set the funnel trap here this morning and my suspicions were confirmed. Most of the Silvereyes appear to have left the area, only catching 5, -  2 new and 3 recaps. Also caught a new Starling and recaptured a House Sparrow. For the last few years Silvereye have departed either the last week of July or the first one in August usually following mild weather with a northerly wind. I suspect they smell the sweet scent of flowering trees probably Karo which is common in parts of Wellington especially on the western side of Houghton valley.

So far this year I have banded 63 Silvereye here which will be, unless there is another influx of birds, the second lowest yearly total in the last 20 years. 1997 was the lowest with 54 banded. Last year 203 were banded and the highest total was in 2001 with 596.
Posted by Peter R at 20:31 No comments: