Queenstown - the last couple of days

Yesterday I had nets up for most of the day. There was a steady flow of birds but not overly busy. Caught 40 birds of 9 species with 29 new and 11 recaps. I have also done some banding today, mainly to check out possible new net sites. Had only limited success but as the saying goes heaps of potential. Also raided the neighbours chook house again catching 4 birds; 1 House Sparrow and 3 Chaffinch. All were banded and incuded the 2 Chaffinch from a few days ago.

Bex called in this afternoon on her way back to Te Anau after attending a banding meeting in Wellington. We had time to go to the Moorhill Rd site for a couple of hours. It proved a successful session with 30 birds caught, 20 new and 8 recaptures. But with only 4 species there wasn't much variety and almost all were yellow ones Yellowhammers dominated with 19 new and 6 recaptures. Other birds were a Goldfinch, a House Sparrow and 2 Dunnock recaps.The two Dunnock recaps were banded last week but all the Yellowhammers were banded last year, with the oldest 2 banded on 9 June the first day of banding at this site. 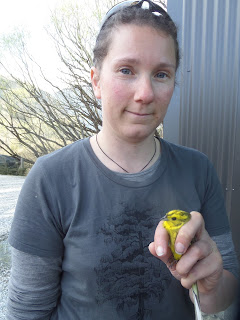 We did have a couple of other species in a net. A Mallard duck, one of a pair that were hanging around, and one of the resident Roosters made a near fatal mistake. After it had been released I discovered that it was destined for a different future.

Queenstown - first banding here for a while

We drove down here on Tuesday for 12 days or so, and have managed to do some banding but there are not a lot of birds about. On Tuesday after our arrival I caught a couple of Chaffinchs that were stuck in the neighbours hen house. Both were already banded the oldest was banded 15 Sept 15 just 3 days after starting banding here. It is now the oldest bird of any species recaptured here.

On Wednesday I went down to Moorhill Rd where there were good numbers of birds feeding with the owners chooks. There had been problems at this site for the first half of this year of a Falcon paying regular visits to collect its daily food supply of either a chicken or a passerine. As a result the chooks were shut up and small birds became very scarce and scared. The Falcon has now stopped its visit and banding can recommence. I managed to catch 13 birds, 6 new Dunnocks and 2 recaps, both banded at this site about a year ago, also caught were 4 new Yellowhammers and 1 recap. The recap was banded here at Littles Rd almost a year ago, not a big movement just a couple of km's but still a good catch.

Species caught were -
Blackbird - 1
Dunnock - 1 (1) the recap was banded in Nov 2015 and is now the oldest for the species.
House Sparrow - 3 (1)
Goldfinch - 1
Silvereye - 9 (3) All the recaps were banded a month or so ago. There continues to be only small numbers of Silvereye about with very few older returns.
Bellbird - 1
Tui - 2

We had a session at the Quarry this morning with near perfect conditions and plenty of birds. Seventy three birds of 10 species were caught with 60 new and 13 recaptures. Ten species in a session is a record number for the Quarry even if several were only represented by one individual.

Species caught were - (recaps in brackets)
Blackbird - 3 (0)
Song Thrush - 1 (0)
House Sparrow - 0 (1) there are heaps about the Quarry but only the one found the net but at least it was a good one, banded 1 Feb last year it is the oldest Sparrow recap and was for a while the oldest of any species.
Greenfinch - 10 (0) a high number for this site.
Chaffinch - 2 (0)
Goldfinch - 2 (0) the first for 2019.
Starling - 1 (0)
Silvereye - 40 (11) several of the recaps were older birds with the oldest also banded on 1 Feb 2018 the same day as the Sparrow. At 588 days from banding it is the oldest Silvereye and joint oldest with the Sparrow of any species.
Bellbird - 1 (0)
Fantail - 0 (1) the first Fantail we have recaptured. It was banded back in Jan as a juvenile so good to see it has made it through the winter. It was enticed into a net by Andrew who is our resident Fantail whisperer and uses a variety of ruses to catch this hard to catch species. 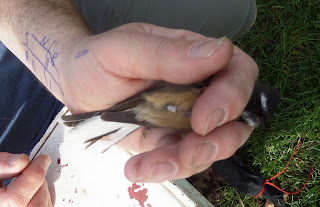 A small group gathered at Jan's this morning and although conditions were good with no wind and low cloud it was also a bit marginal with rain threatening. Fortunately except for some light showers it didn't get bad enough to lower the nets.

We were busy from the start and ended the morning with a record catch of 119 birds. There were 111 new birds and 8 recaps, although there were 6 species represented the majority were Silvereye.

Species caught were (recaps in brackets)
Blackbird - 3 (0)
House Sparrow - 11 (1) the recap had been banded under the old pines in the corner of Findlay's Picnic area on the other side of the Quarry.
Dunnock - 1 (0)
Chaffinch - 2 (1)
Greenfinch - 1 (0)
Silvereye - 93 (6) Two of the recaps had been banded in the Quarry. One in the Australian section in June last year the other originally banded near the main pond and then recaptured in the session a couple of weeks ago near the Stone House. Now it has moved up the road to Jan's garden.

A couple of Old Birds

We were going to have a session at Jan's place this morning but the weather is rubbish. So I am doing a Blog Post instead.

I have recently received some photos of banded birds from the Banding Office. These were taken by a woman near several of the banding sites that have been used for up to 20 years in Wellington. 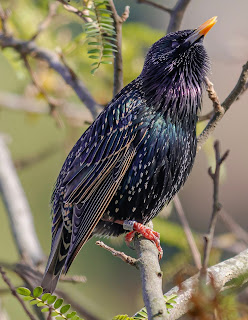 The photo above is of of a male Starling which looks to be in full song. Unfortunately this is the only photo and only part of the band number can be read. It can only be identified as being one of about 10 possibilities all banded in 2009. This would make it one of the oldest Starlings we have recorded.

The other photos are of a banded Silvereye taken at the same property. The photos clearly shows most of the band number except for the third digit A-17?384. If this bird is one of ours which seems most likely it would have been banded in 2008 making it one of the oldest Silvereyes recorded in New Zealand. If it is not one of ours it has most likely crossed Cook Strait making it one of the longest travelers. 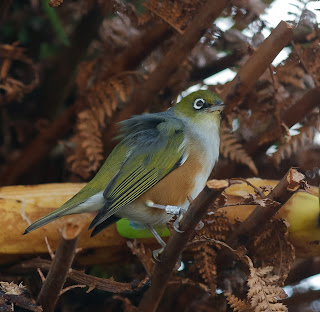 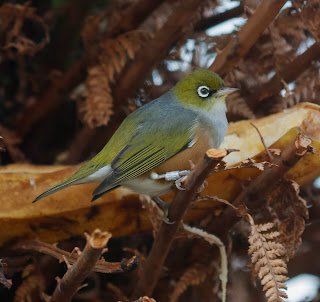 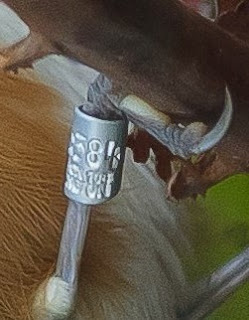 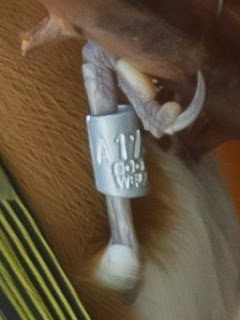