Gen, Nick, Graeme and I had a banding session at the school with a number of children joining us for periods of time. We also had Kate come along to assist after school and a surprise visit from Siobain who used to live in the valley before moving to Picton a year ago.  She was a very keen member of our banding group.
Dave the Caretaker who is one of our liaison people at the School and was the original person who suggested doing banding at the School with the kids was also present and brought along a couple of his friends for the experience.
Although we didn’t catch a lot of birds we still had a successful afternoon's banding. We had very pleasant conditions and it was much dryer underfoot than at the last session. In all we caught 20 birds of 3 species with 8 new birds and 12 recaptures.

Chaffinch – 1 recapture, a bird banded at the stream on 28 Jan 2008 so is a reasonably old bird in at least its 5th year. This is now the oldest bird we have caught at the School.
Silvereye – 5 new and 11 recaptures. 1 of the recaps was banded 31 May 2010 at our second session at this site. 2 others were banded at the stream and another here at my place.

Although not all the children got to handle a bird they all showed great enthusiasm for the project with a lot of interesting comments and questions.

Ros , Derek and I spent some time this morning at the Karori Cemetery. We put up a couple of nets to see what was about and also with the hope that we would catch a colour banded Tui that has lost a band and therefore can not be positively identified. To catch a specific bird is a difficult task and one that we failed in.  Although the bird was seen near a net it didn't oblige by going in. If it is the bird I suspect it to be it would be the oldest Tui we have records of.

We did manage to catch 5 unbanded Tui as well as a Blackbird, a House Sparrow and the last bird of the day was a colour banded Kaka which we managed to get out of the net without losing any fingers. This is almost certainly a bird from Zealandia.  We also had a Bellbird bounce which would have been a good catch but not this time.

One of the Tui had several small white flecks around one eye, not sure if these were small feathers or some small beasties. Took a photo with my little camera but unfortunately the quality is not good enough to resolve the issue.

Email ThisBlogThis!Share to TwitterShare to FacebookShare to Pinterest
Labels: Tui

Ros and I had a session at the Houghton Bay stream this morning with reasonable success. In all we caught 56 birds but there wasn't much variety with only 3 species.

First bird caught was a female Blackbird  which had an unusual tail pattern with the entire tail covered with small bars/lines. These did not appear to be growth bars as they were very even and spread down the length of the feathers.
Next bird caught was a female Chaffinch and all the rest were Silvereyes, with 50 new birds and 4 recaptures. Only 1 of the recaps was banded at this site with 1 from my place banded in July 2011, 1 from the Gully below my house and 1 from Bridie's just down the road. Interestingly only 1 of the over 2000 Silvereyes that have been banded at the Houghton Bay stream since we started banding there in Jan 2008 have been recaptured.

One of the Silvereyes appeared to be going through at least a partial tail moult which is odd for this time of year.

I put up a couple of nets in the morning to see what was about and then in the afternoon operated the trap at Bridie's for a couple of hours. Didn't catch a lot of birds but did have a bit of variety. Caught a total of 9 birds of 5 species, 2 recap Blackbirds, 2 new and 1 recap Starling, 2 recap Greenfinch, 1 recap Dunnock and a recap Sparrow. No Silvereye were caught. Almost all of the Silvereyes left the area about 3 weeks ago, which is the same time as they left last year, so we will wait and see if they return mid October as happened last year.

Gen, Nick, Aussie Graeme (A replacement for Aussie Mick who has returned to Australia) Ros, Bernard and I had a good session at this morning with almost ideal conditions; except like most of the country at the moment it was a bit wet underfoot. There was a steady flow of birds with no big catches, about 6 would have been the max at any one time. In all we caught 47 birds of 5 species with 41 new and 8 recaptures.
Species caught were – (Recaps in brackets)
Blackbird – 2 (2) both the recaps were of a reasonable age, 1 banded in 09 and the other on 28 Sept 08 and is now at 1422 days the oldest Blackbird recaptured at the site. All the birds were male and over 2 year old.
Chaffinch – 6 (1) All 7 birds were also male.

House Sparrow – 25 (3) the oldest recap was banded as an adult in Dec 10
We had a recovery report this week of a Sparrow caught by a cat in Russell Tce, Berhampore, it had been banded at the Island Bay site on 12 Feb 08 and at 1644 days our oldest recap/recovery of a Sparrow from this site.
Silvereye – 3 (0) a very low tally, they seem to have left most artificially fed sites.
Tui – 5 (0) the first 3 to hit the nets bounced out and then they started to stick.

Interesting that the total number of birds caught today was very similar to August last year when we caught a total of 49 but the species were very different, as last year it was dominated by Greenfinch with 36, this year I didn’t even see one.

Thanks once again to and Ken for their great hospitality including a scrumptious morning tea.
Posted by Peter R at 21:06 No comments:

Nick, Kate and I together with numerous little people had a busy afternoon banding at the Houghton Valley School's young forest.  In all we caught 42 birds of 4 species with 33 new birds and 9 recaps.
Species caught were - (recaps in brackets)
Blackbird - 2 (0)
Dunnock - 1 (1)
Tui - 3 (0) the first Tui caught at this site and it came as a bit of a surprise. We first caught a young female then 2 males were caught together probably having a chase and forgot to look where they were going.
Silvereye - 27 (8) 2 of the recaps were banded at the Houghton Bay stream 1 in 2010 and 1 in 2011, another was banded at the Mt Albert site in March this year and another in the Gully below my house in May 2010.
Kate's mother Mary brought us a big plate of pikelets which were very much enjoyed, she also volunteered to be the scribe for a few minutes which turned into more than an hour.  Thanks Mary on both counts.

We had a very successful workshop on aging and sexing passerines at a banding session at the Zoo on Saturday with and his daughter Conori over from Blenheim to assist us.

The number of birds caught was a bit lower than I would expect at this time of the year but this was ideal for the workshop with no pressure and the time to look closely at various features. The number of species was also lower than usual but once again this enabled us to concentrate on a few rather than getting confused with a big variety.

In all we caught 61 birds of 6 species with 24 new birds and 37 recaptures; the ratio of recaps to new birds is surprising as it is usually the other way around.
Species caught were – (recaps in brackets)
Blackbird – 1 (2) the new bird was a first year Male with some unusual wing features with broken wing feathers and P3 replaced, there is also a growth/fault bar across the wings at the break point.
1 of the recaps was banded as a Juv in March 09 and had an unusually shaped bill.

The other was banded as an Adult on 12 Aug 2006 1 day short of 6 years ago which makes it an 8+ bird. It was almost the last bird caught for the day and was caught at the same net site as the original capture. This is the first recapture so where has it been for 6 years?

Greenfinch – 12 (2) numbers are way down on recent years.

House Sparrow – 3 (5) most unusual to have more recaps than new birds but a new net position had an effect - probably won’t work next time?
Silvereye – 3 (26) an incredible recapture rate, I think we must have most of the resident birds banded and that there has been no influx of new birds this year. Most of the recaps were banded in the last couple of years but there were 2 from 2010 and 1 from 09 with another banded at in Sept 2011.
Dunnock – 4 (2) I think 6 is the highest number we have caught at the Zoo in one day. The 2 recaps were both banded as Juveniles last spring.
Starling – 1 (0)

There were no Tui caught which was surprising as there are a large number in the Zoo grounds at present, mostly feeding in the red flowered gum tree. But we did actually band one which is in rehab at the "Nest" (The Zoo animal hospital) and is nearly ready for release.

There were signs of the (hopefully) approaching spring around the Zoo.  A pair of Fantails are nest building (the female is banded and just missed a net a couple of times), the Kea were seen mating in their cage much to the amusement of watching kids and Tui were also doing the business.

The odd coloured Tui that has been at Berhampore for the last couple of weeks is still there and I managed to get a rough photo of it. 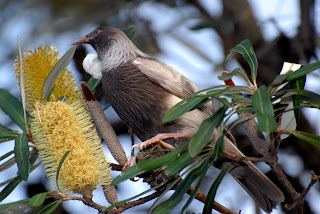 Ros and I spent a couple of hours at the Houghton Bay Stream today with limited success. In the first hour we caught only 1 bird a Tui which I managed to let go prematurely. We were trying to work out it's sex in order to fit the correct sized band and as it had a couple of broken primaries on the right wing which I usually measure I turned it over to measure the left and next thing it was off. I have learned that I am not very good left handed. We caught a Chaffinch next and then 23 new Silvereyes with no recaptures until the last bird caught which was a banded Grey Warbler.  It was banded as an adult on 8 Oct 09 and I think is our third oldest Grey Warbler caught at any site. The catch was a bit lower than I had expected possibly because of recent rain providing other water sources.

I spent the last week or so in Auckland, didn't do a lot of birding partly due to it raining almost every day, but there were a couple of highlights. Saw  Pipits on the Desert Rd on both of the journeys, the first I have seen there for several years. The other highlight was a flock of at least 12 NZ Dotterels  in a field in Albany near the shopping center. There has been a small number there for several years but this is by far the most I have seen at one time.