This post is a bit late but I have been trying to get up to date with data entry. On Tuesday I set the funnel trap here to try and catch some more of the Greenfinch that have turned up in the last few weeks. Managed to catch a total of 15 which is as many as was caught here all last year. There were 6 new birds and 9 recaptures with 7 of the recaps being banded at the Zoo. 2 were banded last Saturday = 3 days, 1 in August = 1 month, 1 2010 = 2 years, 1 in 2008 = 4 years and 1 in May 2007 = 5+ years. This bird is now the oldest Greenfinch we have caught at any site, surpassing the bird caught last week by 4 months. Amazing that having banded here for 20 years and at the Zoo for 12 years these are the first Greenfinch we have recaptured over 5 years from being banded, and now 2 in one week.

Also recaptured a House Sparrow and 4 Silvereyes; the first Silvereyes for 2 months.
Posted by Peter R at 20:39 1 comment:

Ros and I had a session at the Houghton Bay Stream this morning with the principal aim of catching Silvereyes and checking for moult. We were successful with this and as well caught a few other birds. In all we caught 75 birds of 5 species with 63 new and 12 recaps.

Species caught were -
Blackbird - 1 (1)
Dunnock - 2 (0)
Greenfinch - 1 (0)
Grey Warbler - 1 (2) the oldest was banded Nov 2010
Silvereye - 58 (9) 16 of the new birds and 3 of the recaps were in moult.  With this being just over 25% it is a significant number. Whether this is an unusual year with a lot of late fledged birds delaying the moult until the spring or whether we have not paid enough attention other years (and also not usually catching very many spring birds) I am not sure.

Of the 9 recaptures only 1 was banded at this site; with over 3300 banded there in the last 5 years this is surprising. 5 birds were banded at the Mt Albert site with 4 being from the 164 that were banded this year, 2 were from Hornsey Rd and another from Houghton Valley School.

There were several Silvereyes with pox-like lesions mostly on the foot but one had a large one below the eye.
On a slightly different subject we had a report from a Zoo staff member that a band combination had been recovered from the remains (just the legs) of a bird in the Serval enclosure. On checking our records I found that this was not one of our birds. Suspecting it might be a Bellbird from Zealandia I forwarded the report on to them and was extremely surprised to hear back that it was a Hihi (Stichbird) that had made its way across town.

We had a reasonably successful session at the Zoo on Saturday with a total catch of 57 birds of 6 species with 34 new and 23 recaptures. This number is fairly typical for this time of year. Conditions were very calm which was good but also very sunny which made some of the nets very visible, especially at a new site where I had misjudged the sun’s angle and it produced very few birds for the day. There was not a big turnout of people but those who did come arrived at suitable times.

Greenfinch – 21 (6) the oldest bird had been banded in March 08 and is much travelled; originally banded in the Gully below my house it was then caught in Island Bay and now twice at the Zoo.
Last Wednesday I set the trap at Bridie's; didn't catch many birds but did catch a Greenfinch that was banded at the Zoo on 8 Sept 07. This bird is now our oldest Greenfinch recap at any site, the first over 5 years (only by 11 days) and also only our second Finch.

House Sparrow – 10 (3) the oldest was banded in March 10
Silvereye – 0 (10) amazing to get 10 recaps and no new birds; must have most of the resident birds banded? Four of the birds were banded in 2010 and another in May 2007 putting it into the elite 5 year group. One was also in wing moult; a bird banded back in July.
Tui – 2 (0) there are big numbers of Tui about the Zoo and when I was extracting the second bird which was a squawking female at least 10 arrived into the tree above the net to watch proceedings.
One of the privileges of banding at the Zoo is getting glimpses of back of house activity like staff giving some monkeys a vet check.

I had a good morning’s banding at this morning with a steady flow of birds and pretty good conditions. It was a little windy early on and then a bit too sunny later. Numbers were not spectacular but fairly typical for this time of year, with a total of 31 birds of 6 species including 24 new and 7 recaptures.

Species caught were – (recaps in brackets)
Chaffinch – 3 (0)
Greenfinch – 3 (0)
Blackbird – 3 (3) D-193264 a female which was banded 26/5/08 was for a time our oldest Blackbird recap and then D-190454 a male was caught and she was relegated to second oldest (but still oldest female). He was banded 4/11/07 and is now the oldest bird of any species banded and recaptured at this site; neither bird had been recaptured before.
Another Blackbird was recaptured twice about three and half hours apart in that time it had put on about 6 gr in weight.

Starling – 1 (0)
House Sparrow – 11 (4)
Tui – 3 (0) the Brown/fawn coloured Tui that has been in the area for some time was seen several times, mostly while being chased by a large normal coloured male. Managed to catch the chasing bird but unfortunately not the chased!

Email ThisBlogThis!Share to TwitterShare to FacebookShare to Pinterest
Labels: Blackbird

With the Houghton Bay stream being mostly out of the near gale northerly I set up the nets there this morning. Had a reasonably successful session with 40 birds of 6 species caught but although a this appears to be a good variety by far the majority were Silvereye. The recapture rate was extremely low with only 2 banded birds caught.

Species caught were - 2 Greenfinch, 1 Goldfinch, 1 Chaffinch, 1 recap Grey Warbler, 1 Tui and 33 new Silvereye and just 1 recap. The recap was banded here at my place back in July which adds a little bit of credence to the theory that the Silvereye from here have gone over to Houghton Valley to feed on flowering Karo.

Seven of the new Silvereye were in active wing moult; the first time I have come across this at this time of year but must admit I haven't always looked
Birds AP-6688 & 6687 which were caught together I suspect are siblings from a late brood
There appears to have been some young engineers at work in the stream doing a bit of dam building with dams built under two net sites. How this will affect the birds I am not sure; probably for the better.

Set the funnel trap here this morning and caught a couple of Greenfinch, set it again this evening and caught 8 more including a recap that was banded at the Zoo in April 08. Although not a big catch it is the most Greenfinch caught here in the last 2 years, prior to that 20 a day was not uncommon.

None of the Sparrows that have been scoffing food for the last month entered the trap and there is no sign of Silvereyes returning yet.
Posted by Peter R at 20:23 No comments:

There hasn't been any banding done for the last week as I have been in Canterbury visiting family. I doubt whether there would have been much if I had been in Wellington as the weather has not been good as anyone watching the All Black /Puma test on Saturday night would have realised.

Did a bit of birding while down south seeing over 50 species including White Heron (Great Egret), Crested Grebe and Cattle Egret all at, or near, Lake Ellesmere.
I did manage to see some banded birds; not passerines, but some colour banded Wrybill at the Ashley Estuary 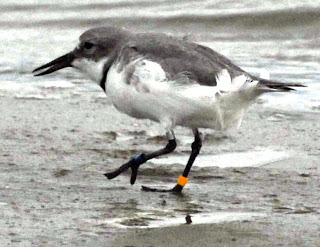 I hope to do some banding in the next few days but with a bad forecast it might not be possible.
Posted by Peter R at 14:22 No comments:

Mary, Kate, Graeme and I had a rather disappointing session at the Houghton Bay Stream this afternoon. In all we caught 17 birds of 4 species with 14 new and 3 recaps. It started well with  8 birds in the first net round and then the flow became a trickle. The quiet time however gave us time to enjoy a large plate of pikelets that Mary had brought along.

Species caught were - 2 new Chaffinch, 1 new and 1 recap Grey Warbler.
1 new Tui which was the last bird of the day and gave Graeme a chance to band his first Tui and 10 new Silvereyes and 2 recaps. 1 of the recaps was banded at 69 Hornsey Rd in July 10 and the other at Island Bay in Aug 08 so the birds had come a similar distance but from opposite directions.  Both were first time recaptures.