Queenstown - The last session for the year

No banding today but I had nets up yesterday morning and managed to catch 28 birds of 6 species. Fourteen were new and fourteen recaps. Amongst those caught were several starting to moult their primary wing feathers which was a bit of a surprise.

Birds caught were -
Blackbird - 0 (1) this bird was banded on the third day banding here and was the oldest bird recaptured for about an hour.
Song Thrush - 1 (0) a bird starting to moult.
Chaffinch - 3 (1)
Redpoll - 0 (1) a female banded as an unsexed juvenile back at the begining of March, now starting to moult, but still surprisingly has a prominant brood patch.
House Sparrow - 9 (11) a number of juveniles starting to moult but no older birds. One of the recaps was banded on the first day of banding here and is now the oldest bird recaptured here.
Tui - 0 (1)
Califoronian Quail - 1 (0) the third banded here and the first male. 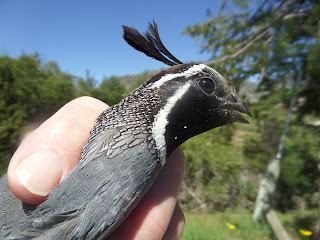