I put up a couple of nets this morning in a differant site than usual, mainly to get away from Sparrows for a change and to try for a few differant birds. Only caught 9 birds but some were interesing.

Birds caught were - a new Dunnock and a recently banded one, two new Chaffinch and a Song Thrush. Three Blackbird recaps, one was banded a few months ago, but DP-6306 was banded as an adult male on the third day banding here and at 656 days from banding is not only the oldest Blackbird but the oldest of any species recaptured. Caught at the same time was DP-6309, a female which had been banded the following day and is now the oldest female BB and the second oldest of any species.

The final bird caught was a bit of a surprise, a banded Redpoll which had been banded back in February as an unsexed juvenile. It is now clearly identifiable as a male although differently coloured than normal. This bird is now the oldest Redpoll recaptured beating the old record by a couple of hundred days. 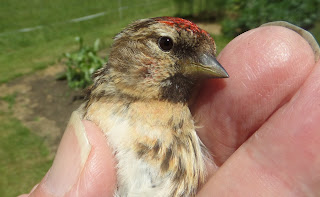 I will not be doing any banding untill at least next week and possibly not untill next year so I hope you all have a great and safe festive season.
Posted by Peter R at 21:00