Queenstown - A Quail or 2 at last

We are now back in Christchurch after our short visit to Queenstown where I managed to get a bit more banding in. On Tuesday had nets up for the morning and had a reasonable catch but had to let the majority go! I found that the new string of BP bands that I had in my gear was non existent and I had no bands to band Sparrows with so had to let about 20 go. Amongst the new birds banded was the first Californian Quail banded at this site. I actually managed to flush a pair into a net but by the time I had clambered over a fence the male had made its escape.

Yesterday (Wednesday), I had nets up reasonably early (well not really early but early for me) and caught a Blackbird and another Quail before rain set in and play was abandoned. I actually managed to flush 4 Quail (2 pair) into a net but by the time I made the 20 m dash only 1 was left.


Californian Quail - 2 (0) both females and the first for the site. In the 3 days I actually had 7 Quail fly into the nets but all but these two escaped. 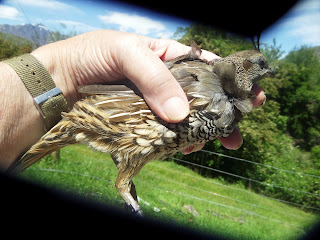 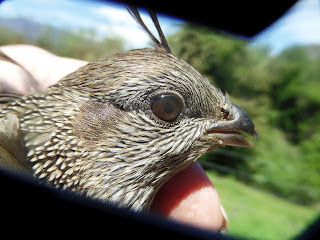 I should be back there in a couple of weeks for an extended period so hopefully will get more banding in then.
Posted by Peter R at 10:48