Queenstown - back for few days

We are back down here for a few days, mostly to do chores like mowing lawns etc. I hope to get a couple of banding session in as well. We arrived Saturday evening and Sunday was a non banding day with a very strong wind all day so got the lawns mown. Today wasn't a lot better although the wind didn't get strong till late morning so put some nets up for a while. Managed to catch a very modest total of 14 birds of 6 species with 9 new and 5 recaps.

Blackbird - 2 (2)
Dunnock - 0 (1)
Chaffinch - 0 (2) the first caught was a female the first Chaffinch banded here and it is now the oldest bird of any species. The second one was a male banded a couple of days later and it is the second oldest.
Greenfinch - 4 (0) included was the first juvenile Greenfinch for the year.
Redpoll - 1 (0) thought I might have caught more as there appears to be a number about. 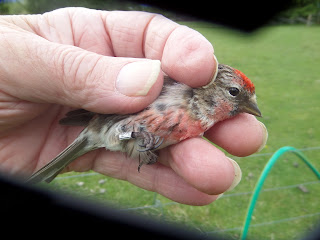 There are a number of Califorian Quail about after an absence of 6 months or so. (since I recieved a variance to the banding permit allowing me to band them.) They are proving hard to catch as they scuttle under the net, rocket over the net or just fly around it. Had one go in but it came straight out before I could get to it.

Also had a flyover of a Falcon, always good to see.
Posted by Peter R at 21:17