Ros and I had a banding session at the Karori Cemetery this morning and although we didn't catch a lot we did get some interesting birds. Unfortunately the day was a bit on the windy side and so this, as well the bright sun, affected a couple of the nets. In all we only caught 7 birds of 3 species with 4 new and 3 recaptures.

Blackbirds were the most numerous with 3 new and 1 recap that had been banded June 09, so a reasonably old bird.

We caught 2 Tui recaps and both had been banded about a year ago. There were a good number of Tui about and it was surprising we didn't catch some new birds. Also 3 colour banded birds were seen. One was banded June 09, 1 on June 10 and the other unfortunately has lost a band and is now W-R/M so can't be positively identified, but the most likely bird is B/W-R/M which was banded in May 04 and occupied the same territory up until this bird appeared with the missing band. 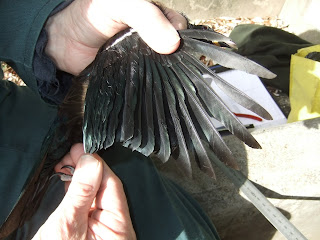 The highlight of the morning was catching a male Bellbird the first we have caught for several years. We also identified a colour banded Bellbird which is almost certainly from Zealandia. 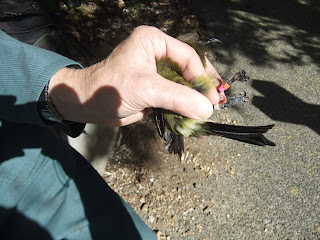 The catch rate from this part of the Cemetery has dropped noticeably since most of the Dogwood trees were poisoned about 3 years ago. They now have bare branches where they were previously loaded with fruit at this time of year.