We had a session at the Halswell Quarry on Thursday morning. The session was held at the opposite end of the Park from the recent ones in an area replanted in native trees.With some of the regular banders away we were a smaller group than usual so only had two nets up instead of the usual four. Despite this we still had a steady flow of birds catching 39 of 6 species. There were 35 new and 4 recaptures. Species caught were -
Blackbird - 1 (0)
Starling - 1 (0) This is the first Starling we have caught this year. 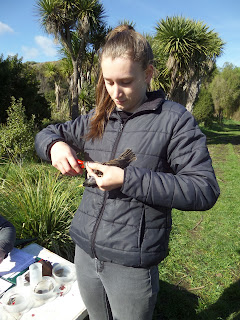 House Sparrow - 8 (3) Included in the recaps was one banded in one of the first sessions and is now at 273 days the oldest bird recaptured at this site.
Greenfinch - 8
We had a group of Tai Tapu School children, who were on a nature tour drop by. Although they were limited by their tight schedule they enthusiastically watch a Silvereye being processed.