I had another session in the neighbour's apple orchard this morning. It was planned that Rachel would again join me but unfortunatly she found the road over the Crown Range to be impassable and she had to return. We will however hopefully try again later in the week.

I had a much shorter session than last week and the strong sun affected 2 of the nets badly. I still managed to catch 27 birds of 8 species with 22 new and 5 recaps. Several of the species were represented by a single bird.

Species caught were - (recaps in brackets)
Blackbird - 1 (0)
Starling - 3 (2) I don't catch a lot of Starlings and make very few recaptures; only recaptured 2 last year. This is a daily record for all catagories. One of the recaps 563 days ago and is now the oldest of the species beating the old record by over 300 days. 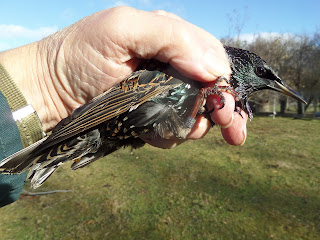