This post is from Annette who has spent the last few weeks on Rangatira in the Chatham Islands. Hopefully she will do a report on the Black Robins when she gets a spare hour or three.


I have just spent a month on Rangatira, a Nature Reserve in the Chatham Islands.


Our main task was to do a complete census of the Black Robins, and band this year’s juveniles. However equally important, though less time-consuming, was to band the Chatham Petrel chicks. 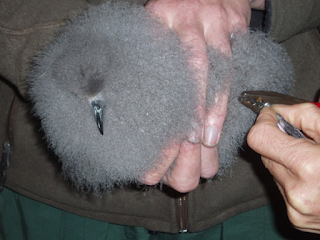 The Chatham petrel (Pterodroma axillaris) is one of New Zealand’s most endangered seabirds. They are an oceanic, burrow-nesting species that come ashore only to breed, and arrive at and depart from the colony during the night. 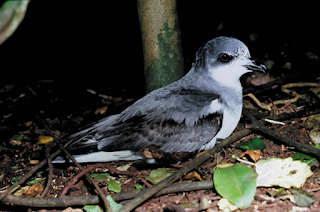 Once one of the more abundant burrowing seabirds on the Chatham Islands, the loss of forest habitat on Chatham and Pitt islands, along with the introduction of mammalian predators such as cats, rats and pigs, lead to them being confined to predator-free Rangatira Island by around 1900. Here their burrows are scattered thinly amongst millions of other seabird burrows in fragile mature forest habitat. 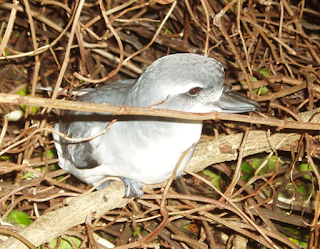 
Intensive management by the Department of Conservation has improved breeding success from 30% of known breeding attempts producing fledglings, to 70–80% from 2000 onwards.
Artificial burrows have been installed for all known breeding pairs and neoprene flaps are fitted over the burrow entrances. The site-faithful petrels have the incentive to push through the flaps during the breeding season, but they deter most prions from entering. The burrows are completely blocked off over winter when the petrels are away to ensure that broad-billed prions do not take over the burrow in their absence. 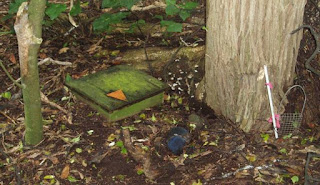 Successful breeding Chatham petrels stay together in long-term partnerships and pairs use the same burrow each season. Adults return in late spring to prepare nests. Established pairings often synchronise their arrival to within a few days. A single white egg is laid in December and chicks fledge in May–June.
After mating, the pair spends about 1 month at sea while the large egg forms and the male conditions himself for the first incubation shift. The male then waits in the burrow for his mate to return and lay. They alternate incubation duty until the egg hatches 46 days later. Commonly, there are four shifts, with the female present at hatching. Parents brood the chick for 1−2 days, then leave it unattended, returning every few nights to deliver food. They feed mainly on squid and fish collected from within a few metres of the sea surface.
Chicks are fed by regurgitation, and receive large volumes of semi-digested food and energy-rich ‘stomach’ oil which is stored in their crop and slowly digested over many days. During the breeding season Chatham petrels feed up to 3,000 km south-east of the Chatham Islands. They over-winter off the coasts of Peru and Chile. 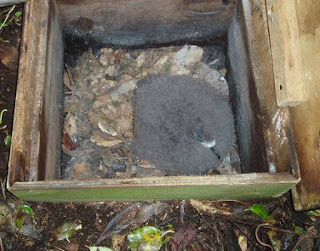 Chicks emerge from burrows for around 10 nights from mid-April, to exercise and find suitable take-off trees. Parents commence  migration while chicks are fledging from late April to June.
The population is now estimated to be about 1,000 birds with 100-130 breeding pairs being actively managed. In the hope of establishing small breeding colonies on Pitt and Chatham Islands, chicks collected late in the breeding season have been translocated to predator-fenced sites on Pitt and Chatham Islands where they have been fed until their departure to sea. Birds do not breed until they are about 4 years old, and do not breed every year.
On Rangatira this season 217 burrows were monitored. 145 were occupied by breeding pairs and about 115 chicks were banded and are likely to fledge. 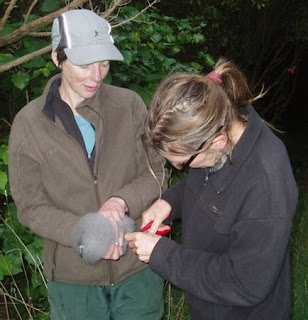