I set the funnel trap here this morning, mainly to check on the Silvereyes. Caught a total of 66 with 29 new and 37 recaps. With a big increase in new birds and a drop in birds from previous years there appears to have been some movement within the local population.  Other birds caught were 2 new Blackbirds, 1 new Chaffinch and a Greenfinch recap from 2013.

The big highlight of the day was a Silvereye that had been banded on 11 Feb 2005. This bird is now at 3824 days the oldest Silvereye that we have caught at any site. It passed the old record of 3817 days which was held by a bird last caught in November 2007. This bird is also now the second oldest bird of any species only surpassed by a Blackbird recovered at the Zoo after 4021 days.

One of the Silvereye was growing the outer 3 primaries on its right wing. As the feathers on the left wing were all full length it might have had a close encounter of the cat kind or something similar. 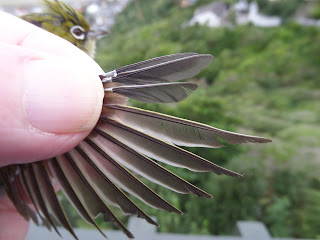 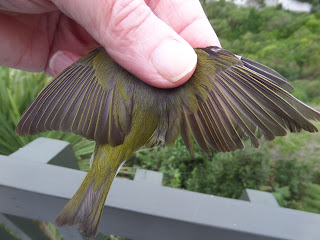 Another bird had a large vascular lump under its left wing, although this looked very uncomfortable the bird could still fly OK. 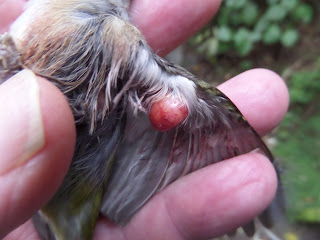