We had a good days banding at the Zoo on Saturday with 129 birds caught with 103 new and 26 recaptures. Although there were 6 species caught the catch was dominated by 2 species with only token numbers from the rest. There was a good team of banders who did a great job of handling the steady flow of birds.

Silvereye - 63 (22) 3 of the recaps came from here at Hornsey Rd, 1 banded in 2012 and the other 2 just 4 days ago. The most interesting recap I think was a bird originally banded in Jan 2010. In Aug 2012 it was found stunned on a path and taken to The Nest for rehab. After some TLC it was released a couple of days later and it is great that nearly a year later it is still alive and well.
Tui - 1 (0) 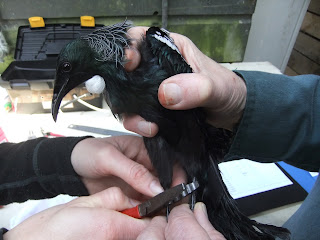 It was interesting to watch a Song Thrush building a nest a few meters from the banding station, a sure sign that spring is just around the corner. It is using the same nest site that a Blackbird used last year.