I set the funnel trap here this morning to have a round up of the Silvereyes. Caught a total of 102 which is the highest daily tally here since 2005.  There were 29 new birds and 73 recaptures. Although the total is only slightly up on the last couple of weeks there must have been a turnover of birds as along with the 29 new, there were 12 from past years which had not been caught previously this year. Among the Silvereyes were 3 banded at the Zoo, 2 at Houghton Bay, 1 at the Houghton Valley School and 5 on Mt Albert.  The only by-catch was a Greenfinch.

This afternoon I operated the trap down the road at Bridie's for an hour or so. Caught a bit more variety but still mostly Silvereyes with 11 new and 13 recaps. Also caught were a new Greenfinch and a recap.The recap was the same bird that I had banded here in the morning (he must be a bit thick as although there are lots of Greenfinch about it was the only one to enter either trap). As well a new Starling and a recap, and 1 new House Sparrow. 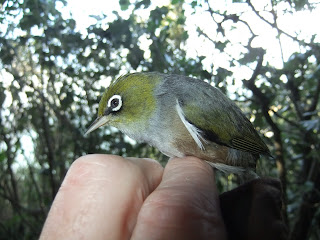