After making two decisions to cancel due to a strong southerly wind and squally showers I changed my mind when the weather appeared to be settling a little so Annette and I started to set up shortly after 9am. We then hardly stopped until we finally called it a day about 2.30; in all we caught 108 birds of 7 species with 80 new birds and 28 recaptures.

Species caught were (Recaps in brackets)

Ken reports that the “Brown” Tui that was around for several days last week seems to have moved on. Coincidently I checked up on the Tui feeding in the Banksia in Chilka St, Berhampore a couple of days ago and there is a “Brown” one there in the same tree where one was a few years ago; same bird???? I wish I knew.

We were fortunate that the weather, although threatening at times, didn’t interrupt proceedings to any great extent however it was a tat on the cold side. Some bands especially the new BP’s were a bit hard to manipulate with frozen fingers but although several were dropped none were lost.

As is usual a great spread was laid out for us unfortunately with birds insisting on jumping into the net we had little time to do it justice. I also didn't have time to take any other photos.

Yesterday (15 June) I had a quick look at the Houghton Bay Stream and caught 4 birds which was about what I expected. Birds were 1 Recap Fantail, 1 new Chaffinch and 1 new and a recap Silvereye. The new Silvereye looked interesting not sure what it had been feeding on but it looked more like a European Robin than a NZ native. 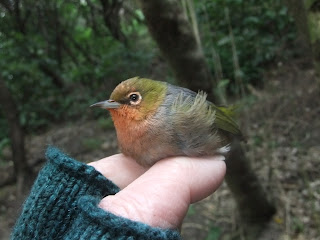 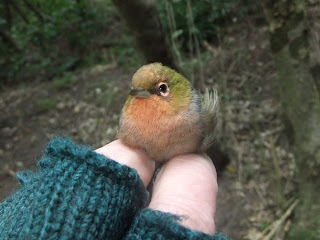