I had a session here this morning, same site as a couple of days ago. Again the start was delayed by damp weather but once it cleared it was all go. Caught a record number of birds for down here. A total of 115 birds caught of 6 species with 90 new and 25 recaps.

By far the majority were Silvereyes with 60 new and 22 recaptures . This is a record number of Silvereye, the previous record was set 5 Aug last year. . Two of the recaps were banded on 20 Sept 2015 they were consecutive numbers AP-16326 & 27 they are now the oldest recaptures here at 1048 days from banding. Except for one being caught the day after banding neither had been recaptured before. The previous record holder AP-16331 which had been caught two days ago was also banded on the same day. Another recap had been banded at The Thurlby Domain, not a huge distance just a few ks but still good to get and the furtherest  we have made. 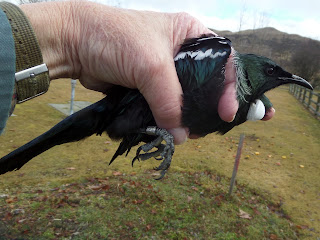