Queenstown - another trip over

We are now back in Christchurch having driven back yesterday. Despite a days rain I managed to get a little banding in since the last post.
On a couple of mornings I put a net up next to some Red Hot Pokers that are in flower next to the drive. I had previously seen half a dozen or so Silvereyes feeding there just after dawn. Managed to catch 20, all except 1were new. The only other bird was a solitary new Song Thrush. 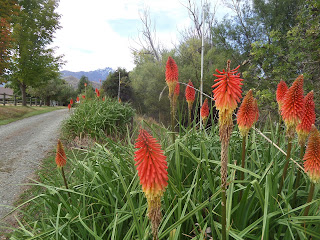 On Monday I had a couple of nets up and caught 13 birds, 6 new and 3 recap House Sparrows, 1 new Tui, 1 new and a recap Bellbird and 1 recap Chaffinch. One of the recap Sparrows and the recap Bellbird were the oldest recaps for their species.