We are driving back to Christchurch tomorrow so this trip draws to a close. I have done some banding most days since the last post with mixed results. On Fri 13th I had nets up near the house but on the other side of the property from last week, again hoping to catch unbanded Tui. In this I was partly successful catching 4, also another new female Bellbird and heaps of House Sparrows, mostly juveniles. 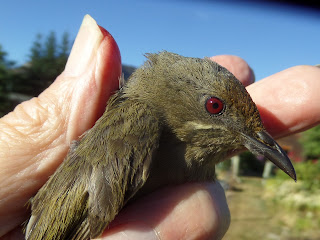 On 14 in the morning & 15th in the afternoon I tried my luck at the stream. The numbers caught were a bit below expectation. On the 14th 15 birds all new except 1 recap House Sparrow. The next day even fewer with 12 all new, except a Dunnock and a Sparrow recap. The 2 Sparrow recaps were both banded as unsexed juveniles, 1 in Dec '15 and the other Dec '16. So it is good to now be able to record both as definitely male.

Today, 16 Jan I caught birds in the neighbour's hen house, catching a lot of juvenile Sparrows and recaptured a few. Also recaptured 4 Chaffinch including 1 banded on 12 Sept 2015, the first day of banding here. It is now the oldest recap of any species.