I have had a couple of banding sessions in the last couple of days. One was very much experimental the other more of the normal kind.

On Tuesday morning I went to the orchard just out of Cromwell where a banded Silvereye was caught by a cat a few weeks ago. The idea was to check if there were more banded birds there. If one had made it it is likely that others have as well as Silvereyes usualy travel in flocks over the winter months. Excess apples have been left on the trees mainly to feed birds and there were 100's of Silvereye, probably nearer to 1000's. Unfortunatly I wasn't very successfull in catching them.

The tally for the morning was a pitifull 13 birds, 8 Silvereyes, a couple of Blackbird and 1 each of Dunnock, Greenfinch and House Sparrow. The low catch was probably due to bright sun on the nets and  the fact that the orchard is surounded cheery orchards with varing amounts of nets still in place. Cosequently the birds appeared to be very net savvy doing abrupt turns instead of going into the mist nets.

This morning I put a couple of nets up here and while not spectacular catching was steady with a total of 38 birds caught. With 9 species there was a good variety. There were 18 new and 20 recaps. The recaps included a couple of older birds. 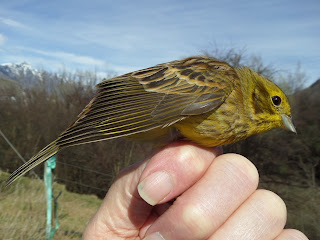 On a different note congratulations to Ross up in Wellington for achieving his Level 3 Banding Permit. Well done Ross.