It has been raining for most of the last week but I did manage to get nets up on a couple of days. It was a matter putting nets up, raining, furling nets, rain stop and then putting nets up again. I didn't catch a huge number of birds but I was still pleased with the catch which included 7 new Tui which were the primary target. It's not often that I manage to catch many of a target species.

The totals for the 2 days was -
Blackbird - 1
House Sparrow -2
Dunnock - 0 (1)
Bellbird - 1 (3) I have now banded 19 Bellbirds with all but 2 being Male. Both Females have been recaptured so they are still about and appear to be the only females coming to the sugar water feeders.
Tui - 7 there are still a few unbanded birds coming to the feeders but the majority appear to be banded.

The forecast for the next week or so is for rain and possibly snow on most days with Tuesday looking like the only day mist netting might be possible. No bird photo today but I have included one showing the first snow of the year on the Remarkables. Should cheer up the snow bunnies. 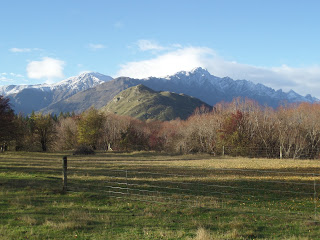