I set the funnel trap down the road at Bridie's this morning. Didn't catch a lot of birds, only 10 of 3 species.
Blackbird - 2 (2)
Greenfinch - 2 (1)
Starling - 2 (1)
All the recaps were recently banded birds except the Blackbird we know as "White Eye". He was caught for I think the 20th time since he was banded in August 2004 and continues at 3324 days from banding to be the oldest living Blackbird we have recaptured at any site. Our oldest recovery is over 4000 days so he still has a bit to go. He weighed in at near his fighting (actually his breeding) weight at 89.9g. His Spring/Summer weight is usually closer to 80g, with his Winter weight up just under 100g. He usually disappears in the Autumn so have not managed to weigh him then or to get a moult score.

I had to go over to Karori this afternoon and took the opportunity for a quick look around the cemetery banding site. Managed to see R/W-B/M also known as "White Tail" due to having a white feather in his tail. This feather makes identifying the bird much easier, especially as he is almost always in the same area. Banded in June 09 not one of our oldest birds but starting to get closer. 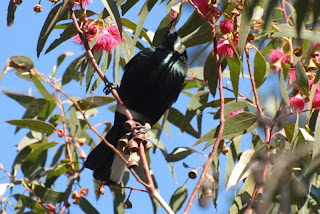