I had a session at the Houghton Bay stream this morning. I only went down because plans A & B failed so with a bit of time on my hands I thought I would check out the stream. At this time of year and after recent rain I didn't expect to catch much, perhaps 10 - 20 birds if I was lucky. I was very wrong and caught 64 birds of 6 species with 47 new and 17 recaptures. I had trouble getting the nets down as birds kept flying in and I was an hour late in getting home. Fortunately I was forgiven (it's actually not the first time). 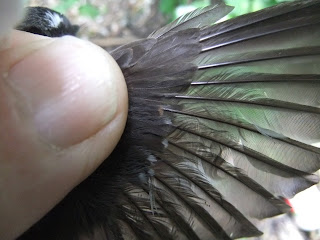