I had a short session at the Thurlby Domain this afternoon, and with only 17 birds it was a bit below expectations. All were new, had hoped for a recap or two but not to be. There were 11 Silvereyes, 2 Dunnocks and 4 Bellbird. The Bellbird were all male and now with 10 banded at this site there must be a reasonable sized population.

The area around the apple trees where I set the nets is frozen solid and I couldn't get pegs in for the guys so had to improvise using several bits of fire wood that were handy. The birds were mostly feeding on apples still on the trees and were mostly too high for my nets. Apples on the ground were mostly being ignored as they were frozen solid. 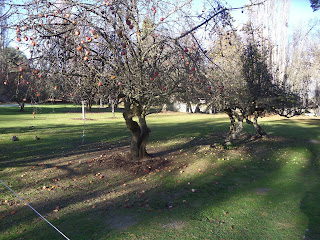 An interesting recovery.
I have received a recovery report from the Banding Office about a Tui that was found dead at Quail Rise which is on the other side of the Shotover River from banding site. When it was found it was being closely accompanied by another Tui which appeared to be nudging it. Quail Rise is about 3.5km in a direct line as the Tui flies although probably twice as far by road.